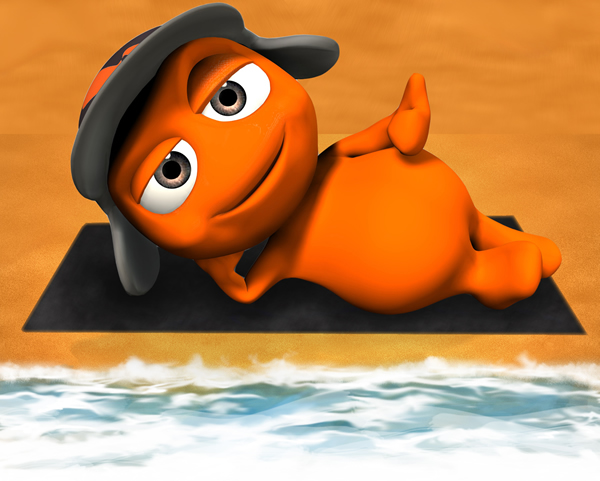 Cool email marketing ideas: this post displays some of the visuals that were used to win business, convert leads and maybe give someone a little smile! These email designs all copyrighted and cannot be used for commercial purposes. By all means, feel free to use these designs for ideas and inspiration.

This is part of an older campaign in which the 3D character was posed and laid flat onto a beach towel – yes he has cheesiness that was created to get a small smile and an eye roll. The character is a symbol of the company personalty, a mascot that was both happy and fun.

This header was created to be an eye-catching piece to pull the viewer into the campaign. This header helped to set the scene of a summer promotion and products that went along with it. The character is 3D render overlaid into some texture created in Photoshop. The textures were created by me.

This was part of a much, much larger marketing campaign to promote a product in which you could create your own smartphone case. The colouring, and the theme were a continuation of the existing branding for the product range with the punk pink and black tech feel which emulated the packaging. In addition to the look of the campaign, additional visuals and elements were added, such as the creative typography and the CTA’s buttons. All visual aspects of the campaign tried to not only respect the branding and the marketing of the campaign but the actively endorse it.

As time went on, subsequent campaigns were created to promote or sell the product. Like the image below shows.

There are other campaigns in terms of look and feel but many have a similar brand look and feel. As time evolved I created campaigns that were not only visual but easier to template and change the characteristics and contents. This proved to be invaluable for tight deadlines.

Thank you for reading this post about my email campaign design. You can either contact me directly for more information or you slap me for drafting up the Satzuma man lying down on a beach towel. Either way, feel free to say hello.

Thank you for reading, if you like this you may want to know more about …

Tips for a successful email campaign

This website uses cookies to improve your experience while you navigate through the website. Out of these cookies, the cookies that are categorized as necessary are stored on your browser as they are essential for the working of basic functionalities of the website. We also use third-party cookies that help us analyze and understand how you use this website. These cookies will be stored in your browser only with your consent. You also have the option to opt-out of these cookies. But opting out of some of these cookies may have an effect on your browsing experience.
Necessary Always Enabled
Necessary cookies are absolutely essential for the website to function properly. This category only includes cookies that ensures basic functionalities and security features of the website. These cookies do not store any personal information.
Non-necessary
Any cookies that may not be particularly necessary for the website to function and is used specifically to collect user personal data via analytics, ads, other embedded contents are termed as non-necessary cookies. It is mandatory to procure user consent prior to running these cookies on your website.
SAVE & ACCEPT